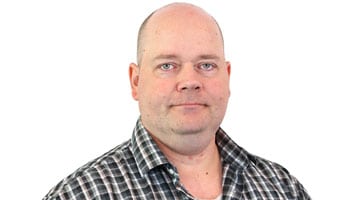 Kenneth Bred Kaiser Christensen is a trained IT supporter and has subsequently been certified within Microsoft, VMware, ITL and IT architect.

He started his career as IT support trainee at Teknos A/S in Vamdrup, Denmark, and continued as IT supporter when he finished his training. He worked with support and operation of the company’s IT solutions, primarily within Microsoft.

Then he came to Flügger A/S in Kolding, Denmark, as IT system administrator, where he worked with the operation of existing IT systems as well as implementation and setup of new IT systems, primarily based on VMware and Microsoft.

Kenneth Bred Kaiser Christensen will, among other things, strenghten Process Engineering A/S’ competencies within IT Service Management and IT Operations/support.