Lars Rostock is Group Leader for our Technical Designers in the Fredericia department and has been employeed in Process Engineering for more than 16 years. Back when he started they were only 10 employees, and the only office was the one in Fredericia. Lars knew CEO Poul B. Jakobsen from a previous employment at Union Engineering. One day Poul called Lars, and then he started as Technical Assistant. Through the years, Lars has worked with many different projects and drawing assignments, he has been responsible for the setup and daily operation of the CAD system and today he manages the daily personnel management of the design team.

“I was employed as Technical Assistant and was to do drawing assignments as a consultant. From the first day I was stationed to do this. “Stationed” is perhaps to much to say, because back then PE’s offices was at Union Engineering – and they were the ones I had to do the assignment for. The only thing I had to do was to walk upstairs. Since then I have worked with various projects such as Amager Bakke in which I designed the piping in the district heating and another where I designed the manufacturing of contrast medium in x-ray scan. The project was carried out in Copenhagen, which meant that I left home on monday morning and stayed in various hotels until thursday evening,” says Lars Rostock and adds:

“One and a half years ago I was appointed Group Leader for the design group, and it has really been an exciting job, which has developed me. PE has always had a very social goal that employees should feel at home with room for one’s family, while working according to “freedom under responsibility”. I can only recommend PE as a workplace,” says Lars Rostock. 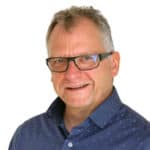